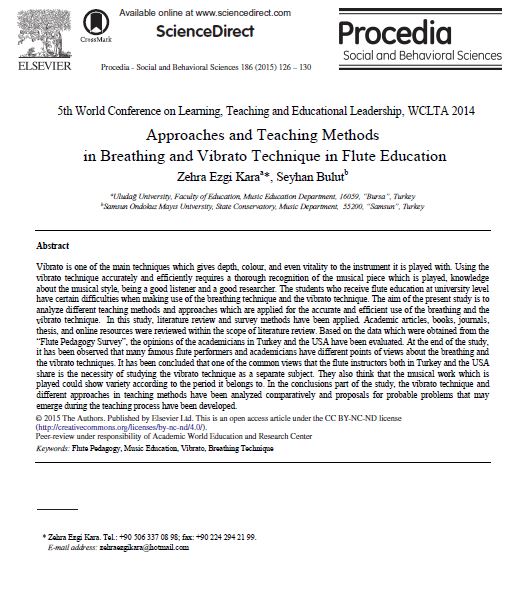 Vibrato is one of the main techniques which gives depth, color, and even vitality to the instrument it is played with. Using the vibrato technique accurately and efficiently requires a thorough recognition of the musical piece which is played, knowledge about the musical style, being a good listener, and a good researcher. The students who receive flute education at the university level have certain difficulties when making use of the breathing technique and the vibrato technique. The aim of the present study is to analyze different teaching methods and approaches which are applied for the accurate and efficient use of the breathing and the vibrato technique. In this study, literature review and survey methods have been applied. Academic articles, books, journals, thesis, and online resources were reviewed within the scope of the literature review. Based on the data which were obtained from the “Flute Pedagogy Survey”, the opinions of the academicians in Turkey and the USA have been evaluated. At the end of the study, it has been observed that many famous flute performers and academicians have different points of view about breathing and vibrato techniques. It has been concluded that one of the common views that the flute instructors both in Turkey and the USA share is the necessity of studying the vibrato technique as a separate subject. They also think that the musical work which is played could show variety according to the period it belongs to. In the conclusions part of the study, the vibrato technique and different approaches in teaching methods have been analyzed comparatively and proposals for probable problems that may emerge during the teaching process have been developed.
< Önceki Sayfaya Dön